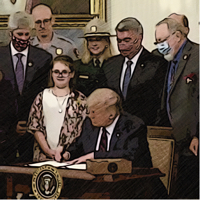 Today is a Historic Day for the American sportsman. President Donald Trump has signed the Great American Outdoors Act, codifying into permanent federal law enhanced conservation and freer access to public lands and waters today – and for generations to come. Thank you, President Trump!

This a monumental victory and the capstone to a hard-fought battle by the Congressional Sportsmen’s Foundation. We all owe a hearty thank you to them for the hard work the continue to do on behalf of hunters and fishermen every day.

“For more than 50 years, Congress has struggled to adequately fund land and water conservation leading to a never ending backlog of maintenance and other critical needs in our parks and public lands, and I’ve been hearing about this for years. I’ve been watching it and hearing about it for years.” said President Trump at the signing ceremony. “Today, more than 5,500 miles of road, 17,000 miles of trails, and 24,000 buildings are in critical need of repair, and have been for a long time. Many are closed, boarded up, they thought it was less expensive to close them than it was to repair them, some of them magnificent too. Earlier this year, I called in Congress to pass legislation that would end this maintenance backlog once and for all. Today, we’re making the most significant investment in our park since the administration of the legendary conservationists President Theodore Roosevelt. This landmark legislation would not have been possible without the incredible leadership and hard work of two outstanding senators in particular, and two fine people Cory Gardner and Steve Daines, I want to thank you both.”

The Great American Outdoors Act provides $9.5 billion over the course of 5 years to address problems with the decaying infrastructure on America’s public lands and waters. The National Park Service will receive the (mountain) lion’s share of the funding – $6.5 billion. The remaining $3 billion will go towards the repair and maintenance of existing public land infrastructure that is managed by the U.S. Forest Service, the Bureau of Land Management, the U.S. Fish and Wildlife Service, and federal agencies that “provide critically important recreational opportunities for America’s sportsmen and women.”

From The Congressional Sportsmen’s Foundation:

“We have been working on this effort for many years, and we are thrilled that the Great American Outdoors Act is now permanent federal law with the President’s signature. This is a once-in-a-lifetime victory for sportsmen and women,” said CSF President Jeff Crane. “Now, we will finally realize the benefits of increased conservation funding, increased access for hunters and anglers, more support for public lands and waters, and a boost in the sporting-conservation economy. CSF extends our sincere thanks to the House and Senate Congressional Sportsmen’s Caucus (CSC) members that championed and voted to support these priorities.”

The inclusion of funding specifically for BLM, USFWS, and USFS lands and waters will ensure that Americans have the ability to access critically important hunting, fishing, and recreational shooting opportunities. Over 246 million acres, or 99%, of BLM lands are open to hunting and fishing while the USFS reports that 99% of the 193 million acres it administers are open to hunting and at least 99% of USFS administered rivers, streams, and lakes are open to fishing. Collectively, BLM, USFWS, and USFS annually support more than 25 million hunting days and nearly 45 million fishing days, highlighting the importance of these lands for America’s sportsmen and women as well as the outdoor economy. Additionally, funding to address these agencies’ maintenance backlog will create over 100,000 employment opportunities.

As an added bonus, the Great American Outdoors Act also provides $900 million annually – full and permanent funding – for the Land and Water Conservation Fund, which is one of my favorite programs. The LWCF continues to be one of the most successful conservation programs in the history of the United States, having completed conservation, recreation, and access projects in every single county in the country.

The Great American Outdoors Act also ensures that $15 million annually is dedicated to the protection and increase of public access for hunting, fishing, as well as other forms of outdoor recreation.

See you out on the trails!