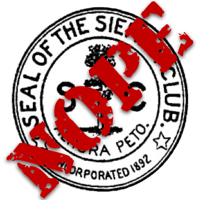 This group continues to claim they have some nonsensical “complex history” when they – quite clearly – do not. They’re just environmental extremists who have no clue as to how to be good stewards of the planet. They don’t understand conservation. And using “Sierra” in their name doesn’t make much sense as they have no interest in their namesake.

Lately, they’ve decided they’re going to change the direction of the club; they’re more interested in politics rather than affecting change for the good of the earth. This puts them at odds with what John Muir put in place for the club.

The good news is that they no longer seem to want to continue with their misguided crusade to destroy the natural world through emotional environmentalism.

The better news is that without their continued interference, we have a golden opportunity to step in and actually protect the environment through pragmatic conservation practices – as was originally envisioned by legendary conservationists like John Muir, Gifford Pinchot, Aldo Leopold, and Theodore Roosevelt.

The time is now. The place is our planet. If you’re interested, drop me a line and we’ll get started.