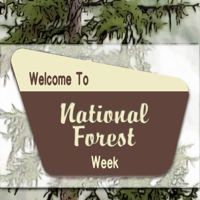 This year marks the second year of National Forest Week, which is a week-long celebration of our national forest and grasslands. The program was started in 2019 by the National Forest Foundation, which is a congressionally chartered non-profit parter to the U.S. Forest Service.

It may be a little more difficult to get out there based on your state’s COVID-19 response – in California, Governor Newsom’s “rules” are completely random, and change depending on his mood and who he thinks is bothering him. It’s not “science” out here, it’s “ego.” At the end of the day, though, sunlight is good for what ails you. Get outside, practice social distancing, and see what makes our national forest so awesome!

One hundred forty five National Forests, 20 National Grasslands and one National Tallgrass Prairie comprise 193 million acres of public land. These lands comprise 8.5 percent of the total land area of the United States, an area about the size of Texas. These special places exist in 43 states across the country. Almost 60 forests are located near large urban areas that have populations of at least one million people. Our National Forests host 170 million visits every year. Recreational visitor spending alone pumps $13.5 billion into our economy annually, sustaining nearly 223,000 jobs in gateway communities. These lands are the foundation of America’s outdoor recreation heritage and sustain our way of life. They provide: water to millions Americans in thousands of communities; clean our air; store carbon; incredible wildlife habitat; hunting and fishing access; timber, minerals, oil and gas; and so much more for our communities and the nation.

I volunteer a LOT with the U.S. Forest Service – not just because I hike or Jeep often, but because I firmly believe that our national forests and public lands are important and they should be properly stewarded for future generations. The idiotic “environmentalist” nonsense has done an incredible amount of damage to our natural resources, and that needs to be stopped. Conservation is how you protect the land.

70% of Americans live less than two hours from a national forest, but most of us aren’t really aware of it. Get out there. See what an incredible resource we have.