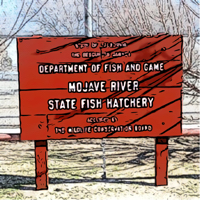 Awhile ago I posted about the release of Chinook Salmon into the wild. I received some email asking about the annual release of rainbow trout, and noticed that there wasn’t anything coming from the ten fish hatcheries that usually participate in this.

It turns out that there has been a lactococcus garvieae outbreak in Southern California and the Eastern Sierra hatcheries.

What is lacta …lackadais … what is this bacteria? Lactococcus garvieae is described by the CDFW as being “similar to streptococcus.” It can cause disease in both freshwater and saltwater, but hasn’t been detected in California until this year. The CDFW says “Lactococcus garvieae can cause a blood- borne disease with symptoms including anorexia, bulging eyes with hemorrhaging around the edges, lethargic or erratic swimming, darkening of the skin, swollen abdomens and increased mortality, or be asymptomatic and show no signs of infection depending on a several factors including water temperature and stress.”

The bacteria was discovered first in the Mojave River Hatchery back in April, and the site was immediately quarantined. All of the trout are affected, with mortalities of approximately 50,000 to date. More deaths are expected.

Pathologists from the CDFW found similar bacteria at the Fish Springs and Black Rock Fish hatcheries in mid-June. Fish from all three hatcheries are under quarantine at this time, and stocking has been halted.

The source of the outbreak isn’t known, but the CDFW believes that it could have been carried to the hatchery by birds that picked it up from an environmental source. Once present, the bacteria can be spread through the movement of infected fish or eggs.

From the CDFW: “The bacteria has been passed to humans in rare cases, but fish-to-human transmission is unlikely. As always, anglers should follow U.S. Food and Drug Administration recommendations on cooking fish to an internal temperature of 145 degrees.”

The good news is that there are seven other rainbow trout hatcheries and two planting bases still in operation. Most of these facilities serve the northern and central parts of the state. Only one site – Fillmore Hatchery – serves Southern California, and this production facility will not have plantable sized fish until the end of summer.

To find out more about rainbow trout in California, visit the California Department of Fish and Wildlife HERE.