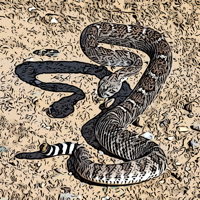 One thing that seems to surprise many hikers – seasoned or otherwise – is that snakes are anxious to get back outside as well.

Most of the native snakes are harmless, but there are rattlesnakes out there whose venomous bite can cause severe injury or death. Not only to you, but to your curious pets who may never have seen (or heard) a rattlesnake before.

So a quick refresher on snakes:

First and foremost, there are visual cues that will tell you whether a snake is venomous or not. If you don’t know them, then consider all snakes venomous, it’s safer that way. And remember: ALL snakes will bite, and they’re really, really quick

Next, snakes are camera shy, and don’t like selfies. I’ve seen idiots out on the trails trying to get close to a snake so they can get the perfect instagram shot next to a cornered, coiled, agitated and rattling snake. I believe it was Darwin who said, “Your duckface peace sign mugging for the camera isn’t worth dying for.”

Snakes, generally, aren’t aggressive; they’d much rather slither away than interact with you. If you do get bit, it’ll probably be because you surprised the reptile.

Snakes are early risers; they’re most active early in the morning or late in the afternoon. They aren’t particularly fond of midday heat.

Finally, if you’re outdoors, stay on marked trails. Not just because it’s #LeaveNoTrace recommended, but also because you’ll have a better chance of seeing snakes on the path as they cross.

Don’t let snakes keep you from getting outdoors, though; the California Poison Control System says the chances of being bitten are small compared to the risk of other environmental injuries.

The California Department of Fish and Wildlife as some tips for safely living in snake country on their website HERE. They’ve also got tips for keeping snakes out of your yard as well as what to do if you get bitten by a snake.

California Herps has a bunch of information on California reptiles on their website HERE.

You can read up on why wild animals don’t need your food at the CDFW “Keep Me Wild” campaign page HERE.

Now get outside! I’ll see you on the trails,..