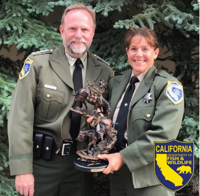 The California Department of Fish and Wildlife (CDFW) is proud to announce that Wildlife Officer Nicole Kozicki has been selected as the Pogue-Elms Wildlife Law Enforcement Officer of the Year. The award, which was formally presented to her at the Western Association of Fish and Wildlife Agencies (WAFWA) annual conference on July 10, is considered their highest honor. Kozicki is also the first female recipient of the award.

CDFW’s Law Enforcement Division selected Kozicki as the 2017 Wildlife Officer of the Year, which led to her nomination for the WAFWA award. Kozicki has honorably represented CDFW in the San Francisco Bay Area and its communities for 27 years.

“We are very happy to see Wildlife Officer Kozicki receive the Pogue-Elms award for her extraordinary dedication to the protection of California’s natural resources,” said Assistant Chief Steve Riske, who supervises Kozicki. “Her tireless investigations of poaching, pollution, and environmental crimes are an example to her fellow wildlife officers in California and to others throughout the country. Her reputation brings great credit to herself, CDFW and California.”

You can read the entire article HERE.