Nicole Kozicki Recognized Nationally as Wildlife Officer of the Year 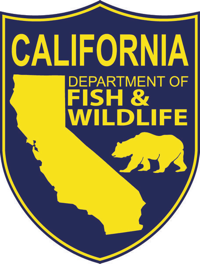 California Department of Fish and Wildlife (CDFW) biologists have captured and fitted a tracking collar to a female gray wolf in Lassen County, and confirmed that the wolf and her mate have produced at least three pups this year.

During summer and fall 2016, remote trail cameras captured images of two wolves traveling together in Lassen County. There was no evidence they had produced pups at that time. While the female’s origins remain unknown, genetic samples obtained from scat indicated the male wolf originated from Oregon’s Rogue Pack. The famous wolf OR7 is the Rogue Pack’s breeding male.

In early May 2017, partner biologists from the U.S. Forest Service (USFS) found evidence of recent wolf presence in the Lassen National Forest.

You can read more about our new wolf pack HERE.