Question: Do you think that novelists can write about what they don’t know? 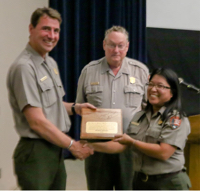 Yosemite National Park is proud to announce that Park Ranger Sharon Miyako is the recipient of the 2016 Barry Hance Memorial Award. This ceremony was attended by approximately 300 people, including several past Barry Hance Award recipients.

The Barry Hance Memorial Award is a peer-nominated award that is named in honor of Barry Hance, a long-time employee of Yosemite National Park who died in an avalanche while plowing the Tioga Road in 1995. Recipients of this prestigious award are employees who exemplify the qualities and attributes of Barry Hance. These include team work, a positive attitude, concern for the public and fellow employees, public service, and a deep love for Yosemite National Park.

Sharon Miyako exemplifies the qualities of the Barry Hance Memorial Award. According to the Rangers who nominated her, “Sharon has an eternal positive attitude and a heart of gold. She listens to concerns and will bend over backwards to accommodate the needs of others whether they are her staff, her supervisors, community members or visitors.”

You can read more HERE.