Road Rage and Stupidity in the San Bernardino Mountains 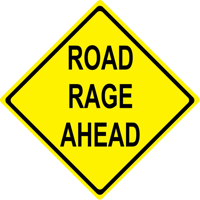 As a member of a number of different groups, I sometimes notice stupid people with internet testicles getting their dander up over a supposed wrong that someone else did to them while driving in the mountains. Here’s the latest:

This was publicly posted by some chick:

Hello big bear residents,
Today we were driving down the 38 around 12:30ish and we encountered a very rude and inconsiderate driver. He was riding our tail ,swerving,honking his horn and giving us the finger. We finally pulled over to let him pass. He did the same thing to the driver in front of him until we passed the Yucaipa turn off. I took a picture of his car and license plate and we started to flip me off again as we approach him to tell him to pull over this driver cut us off and took off down lugonia driving like a total jerk. This man with long white hair was driving like a total A.. and could of caused a major accident and he didn’t care. I believe this person is a big bear local with several stickers on his gray Nissan rogue. You are an inconsiderate driver and your behavior was uncalled for!!

So … you didn’t pull over to let him pass, you chased him, and you tried to pull him over.

Are you the police? If you’re not, then use the turn outs, don’t chase people, and don’t try to pull them over. That’s how accidents and road rage incidents happen.

The road rage princess responded with an IM:

Excuse me Shawn, I am unable to leave a comment on the post I wrote. I don’t appreciate you making me sound as if I was the road rager ASShole here. We were the victim, this guy drove tailgating and swerving around us and there was no where to pull over. As for policing I was on hold with Redlands dispatch from Yucaipa turn off to Loma Linda (Anderson exit). Yes there were two calls ahead of me. I can show you the phone calls if need be. I don’t appreciate reaching out to my community and getting responses like yours especially since you didn’t understand what I wrote and twisted what I said. Thank you for making me sound like the ASS and if you knew me you would know that I am a very kind and considerate person watching out for my community where I am raising children of my own. By the way my husband is a retired fireman with law enforcement background and did the right thing.

To which I responded:

So … You didn’t call 911 – which is what you should have done, as you would have been connected to the CHP; you didn’t pull off to let the driver pass; you claim to be ‘watching out for the community’ while driving nowhere near the community and playing policewoman; and you think that because someone you know – not you – is retired from something that has nothing to do with law enforcement at you get a pass for acting out some wacky police fantasy on the highway that could have led to accidents or even the deaths of innocent people?

I’m not the one making you sound like an ass, you’ve done that all by yourself.

Please take some time to learn the rules of the road, and maybe take a civics class or two so you can learn how to be a good citizen. I’ve only recently had a friend come very near death because someone like you decided they wanted to play cop.

Her next IM was:

Really wow you know you have some fucken nerve, your not worth it..by the way live up to your title

To which I responded:

Your comment proves out exactly what I thought when I first saw your vigilante fake wannabe cop post. You’re a danger to the community.

Sure dude! Post a picture of me and slander me even more. Your obviously stupid

shawn dont take your personal experiance out on me and thank you for your nice comments,know the facts first and live up to your titled im sure we will run into eachother at least have the balls to introduce yourself to me so i know who you are.

I rest my case.

Mountain driving for most people is difficult enough in the best of circumstances.  It’s people like this road raging princess who make it even more of a hazard because they believe that they are The Law, and that they are in the right.  I’ve discovered that those who think they’re in the right quite often aren’t.  This is another example of the type of driver you can expect on the mountain.

Please be careful when you drive; you never know when the person in the next car is a road raging psychotic just looking for their next victim so they can prove how much better they are because they’re not cops … they just play one on the internet.  These people are generally under educated poor drivers who don’t know the rules of the road, don’t understand what a turnout is for, and insist that you’re in the wrong no matter how badly they’re behaving; I’ve run into people like the road range princess many times.