Question: What are some tips that can help me successfully publish a book through a major publishing house?

Question: Should I submit to a publisher or only publish on Kindle? 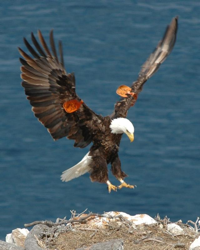 From the National Park Service:

Bald eagles continue to expand on the California Channel Islands with the discovery of a nesting pair on San Clemente Island for the first time in over 50 years.

This discovery means that bald eagles have reestablished territories now on five of the eight Channel Islands following their disappearance from the islands in the early 1960s due primarily to DDT contaminants in the food chain.

Dr. Peter Sharpe with the Institute for Wildlife Studies who has spent 18 years dedicated to bald eagle recovery efforts said, “This news is very gratifying. I expect to see bald eagles return to all eight of the Channel Islands within a few years which will mark yet another milestone in their successful recovery.”

“This is good news for the continued recovery of the ecosystem of the Channel Islands and the Navy’s ongoing interest in protecting the environment,” said Captain Christopher E. Sund, Commanding Officer of Naval Base Coronado, which balances responsibility for operations and training with wildlife management on San Clemente Island.”It is also emblematic of the Navy’s good stewardship over many years at San Clemente Island,” he said.

Although it does not appear there were any chicks this year in the San Clemente nest, it is an encouraging find to know that bald eagles now occupy the majority of their historic territories on the Channel Islands.

Overall, this year’s bald eagle season yielded 16 breeding pairs with 14 chicks joining the population of over 60 resident birds on the Channel Islands.

There were nine active nests established this season within Channel Islands National Park with ten chicks. On neighboring Santa Catalina Island there were seven active nests with four chicks fledging including a new pair nesting east of Two Harbors.

The two birds that established a nest on San Clemente Island trace their origins to Santa Cruz and Santa Catalina Islands. The female is a ten-year old eagle known as A-32 who hatched in a nest in Juneau, Alaska in 2004. She was released on Santa Cruz Island that same year as part of a bald eagle reestablishment program funded by the Montrose Settlements Restoration Program. The male is a seven-year-old known as K-76. He hatched in an artificial incubation facility on Santa Catalina Island and then was fostered into a nest at Twin Rocks.

From 2002 to 2006, 61 bald eagle chicks were released on the northern Channel Islands as part of this reestablishment effort. In 2006, a milestone was reached when the first eagle chick hatched naturally on Santa Cruz Island in over 50 years.

Montrose Settlements Restoration Program is a multi-agency program funded by court settlements and dedicated to restoring natural resources harmed by DDTs and PCBs released in the environment in southern California.

You can view the Channel Islands bald eagle webcams on the IWS website HERE.

You can find out more about the Channel Islands HERE.