Today is National Get Outdoors Day!

Help save the first Air Force One 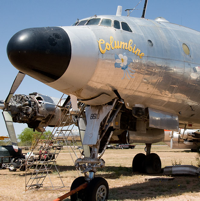 In 1953 a presidential call sign was established by the Eisenhower Administration. The call sign stemmed from for two aircraft – Eastern Airlines flight 8610 and Air Force 8610 – entering the same airspace and which could have resulted in a midair incident.  The Air Force aircraft was, at the time, carrying President Dwight D. Eisenhower.  The first flight of a presidential aircraft with the call sign Air Force One was in 1959.

President Eisenhower used four propeller driven aircraft during his tenure, including two Lockheed C-121 Constellations – possibly one of the most beautiful aircraft to fly.  The Constellation came about because in 1939 Howard Hughes needed a 40-passenger transcontinental airliner with 3,500 mile range so that his airline company Trans World Airlines could compete with Pan Am. He approached Lockheed, and the Constellation was born.

Columbine II is in need of restoration. This is a great airplane with a storied past.  Please contribute and help save this beautiful aircraft for future generations.