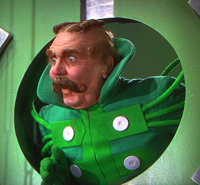 My favorite author has just spanked the Emerald City Doorman hard enough that it’s going to leave a mark.  And Mr. Maass is going to have a severe limp for quite awhile!

It’s no secret that I am an indie-publishing heretic, posting often and everywhere about how every author should look into getting themselves published without getting ridden hard and put away wet by a legacy publishing dinosaur (that’ll give you a limp for sure!).  But no one – NO ONE – takes the publishing industry or their flan-boys to task better, cleaner, and more beautifully than Mr. Konrath.

Ah, class warfare. The royals vs. the peasants. The bourgeoisie vs. the proletariat. The establishment vs. the revolutionaries. The haves vs. the have-nots.

The gatekeepers spouting bullshit vs. the new breed of writers calling them on their bullshit.

I present literary agent Donald Maass from Writer Unboxed, author of Writing the Breakout Novel, currently $9.99 on Kindle and ranked at #25,065.

Thank you, Mr. Maass, for posting your BS publicly so I may dissect it, line by line, exposing it for the utter crap that it is. Then after I wrote my responses, I asked Barry Eisler for his take.

Donald: This month in keeping with our look inside publishing, I’m departing from my usual craft advice to give you my view of the new state of the industry.

I don’t see the new shape of things as many do: the twilight of the dinosaurs, the old-thinking Big Five print publishers staggering, falling to their knees and heading for extinction as they’re overwhelmed by a nimble army of small, warm-blooded mammals whose claws are the sharp, smart, flexible tools of electronic publishing.

Isn’t is interesting how these billion dollar industries, when confronted with Expedia and Orbitz and Priceline (sorry Travel Agents) and iTunes and Napster (sorry Record Company Executives) and digital photography (sorry Kodak and Polaroid) and cable TV, Netflix, and YouTube (sorry ABC, NBC, and CBS) also felt they had nothing to fear, until their market share evaporated before their eyes?

Within the past few years, one of the two major book chains disappeared, the Big 6 became the Big 5, the DOJ brought suit against many of the companies you regularly do business with (and the AAR stupidly defended), and ebooks have gone from idea to the increasingly preferable way readers buy media thanks to a new company that revolutionized the way books are sold.

Sweet cling peaches in heavy syrup!  THAT, right there, is literary gold.  I don’t care who y’are!

To read the rest of this awesome post, go HERE.