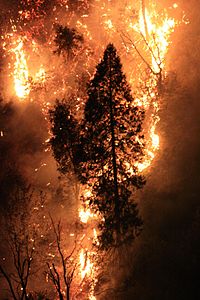 A deer hunter — not pot growers, as some politicians with an agenda publicly stated — started the Rim Fire that burned through over 237,341 acres of land in the Stanislaus National Forest and Yosemite National Park before firefighters finally got the upper hand.  The 402 square mile fire blazed through more than $127 million of taxpayer money just fighting it.  It began in the steep hills of the remote Jawbone Ridge area to the east of Groveland on August 17, 2013 and quickly spread out of control.  Losses are estimated to be in excess of $50 million.

Now, according to SFGate’s Kurtis Alexander, it looks like federal charges may be pending against the deer hunter who touched off the wildfire. From the article:

A hunter accused of starting the wildfire that tore through Yosemite National Park and the Sierra foothills this year is expected to face federal charges, said the district attorney of Tuolumne County, where the blaze ignited.

Michael Knowles said on his office’s website that the U.S. attorney’s office has indicated it will charge the suspect, who has not been identified. He said federal attorneys will lead the prosecution because they have greater resources.

The U.S. attorney’s office in Sacramento, which has jurisdiction in Tuolumne County, declined to comment Thursday.

Federal firefighting officials have said the hunter lit an illegal campfire in the Stanislaus National Forest, which grew out of control and became the 402-square-mile Rim Fire, the third-biggest blaze on record in California.

You can read the whole article HERE.

“The primary investigation of the cause of the “Rim” fire is and has been for some time completed. The cause, origin, and responsible(s) are known. Federal Prosecutors have privately declared intention to prosecute. Potential accountability in the Federal System far exceeds that which is available in the post-realignment (AB109) California System. Tuolumne County Prosecutors and the People of Tuolumne County await just conclusion in the Federal System. Questions should be directed to the United States Attorney’s Office in Fresno California.”