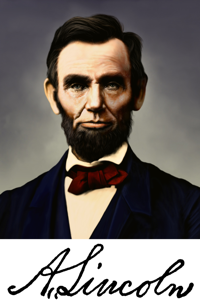 On this day, President Abraham Lincoln delivered the Gettysburg address to a deeply divided country.  It wasn’t a long speech – 278 words, total – but it continues to be one of the most enduring.

Not once does the President use “I” or a teleprompter.  He doesn’t come to divide the country based on the color of skin.  He comes to unify.  He uses the word “we” over and over again to talk about a unified country.  Both the idiot who occupies the White House and all elected members of Congress could learn quite a bit from this speech and this man.

Abraham Lincoln was the first Republican president, and his ideas weren’t popular; liberals didn’t want to end slavery.  They were fighting and dying to save their way of life.  Republicans were a new party, and didn’t garner much favor in the south.  In fact, it was specifically because of the Republican party that liberals created the Ku Klux Klan.  Liberalism was then, and continues to be today, the most divisive and un-American ideal that was errantly imported to this great country.

The country has drifted far from where it was in 1863.  Liberalism continues to be a disease that spreads hate among the uneducated, and continues to insist on dividing people based on race, creed, color, religion, and sexual preference.  Once liberalism and all of it’s vitriol is removed from the landscape, we can have peace, unity, harmony, and a nation based on the belief that all men are, truly, created equal.

Four score and seven years ago our fathers brought forth on this continent, a new nation, conceived in Liberty, and dedicated to the proposition that all men are created equal.

Now we are engaged in a great civil war, testing whether that nation, or any nation so conceived and so dedicated, can long endure. We are met on a great battle-field of that war. We have come to dedicate a portion of that field, as a final resting place for those who here gave their lives that that nation might live. It is altogether fitting and proper that we should do this.

But, in a larger sense, we can not dedicate — we can not consecrate — we can not hallow — this ground. The brave men, living and dead, who struggled here, have consecrated it, far above our poor power to add or detract. The world will little note, nor long remember what we say here, but it can never forget what they did here. It is for us the living, rather, to be dedicated here to the unfinished work which they who fought here have thus far so nobly advanced. It is rather for us to be here dedicated to the great task remaining before us — that from these honored dead we take increased devotion to that cause for which they gave the last full measure of devotion — that we here highly resolve that these dead shall not have died in vain — that this nation, under God, shall have a new birth of freedom — and that government of the people, by the people, for the people, shall not perish from the earth.