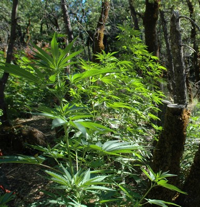 Apparently I’ve been going to the wrong forests; I NEVER leave any of the places I hike in looking for Cheetos and pizza!  I guess I’d better head up to Inyo!

The Inyo National Forest and the Bishop Field Office of the BLM seek to provide a safe environment for the public, its employees, and natural resources.  So while only a fraction of our public lands are affected by illegal marijuana cultivation, the agencies believe that safety risks are real and visitors and employees should be informed about them.

“The safety of public land visitors and our employees is our top priority,” said Forest Supervisor Ed Armenta.  “Marijuana cultivation does occur on some public lands.  It’s important for people to understand that they need to be aware of their surroundings.”

Marijuana cultivation makes many disturbance to natural resources, causes extensive and long-term damage to ecosystems, and impacts the supplies of public drinking water for hundreds of miles.  Growers clear native vegetation before planting and sometimes use miles of black plastic tubing to transport large volumes of water from creeks that are often dammed for irrigation.  The use of banned herbicides and pesticides by marijuana growers kill wildlife and competing vegetation.  This loss of vegetation allows rain water to erode the soil and wash poisons, human waste, and trash from the grow sites into streams and rivers.

Here are some clues that you may have come across a marijuana cultivation site:

As soon as you become aware that you have come upon a cultivation site, back out immediately. Never engage the growers as these are extremely dangerous people. If you can identify a landmark or record a GPS coordinate, that’s very helpful. The growers may be present and may or may not know that you have found their grow site.

Get to a safe place and report as much detail about the location and incident as you can recall to any uniformed member of the Forest Service, BLM, or local sheriffs or police department.  Leave the way you came in, and make as little noise as possible.

I personally feel that using our national forests as marijuana farms is a really bad idea; most of the “farmers” don’t understand conservation, don’t care about the ecosystem, and do a great deal of damage before the crop comes in.  Why?  Because they’re doing an activity that – by all rights – shouldn’t be illegal in the first place.  By criminalizing marijuana farms, only criminals will grow marijuana.

Mendocino’s zip-tie program that allowed farmers to grow the plant in a safe, intelligent, and legal ways was the BEST plan for marijuana growing EVER.  We should bring that back and make it a state-wide program.

It’s a shame that California continues to elect liberal morons who aren’t interested in creating a safe and sane environment for growers to properly grow the crop that Californians made legal years ago.

Sometimes Californians just can’t see the forest for the weed…