National parks closed? Volunteer to help out at a California state park! 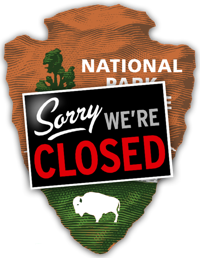 Also today Yosemite (and other national parks) are closed due to the government shutdown.

The federal government partially shut down at midnight on Tuesday because of the continuing zany antics of the most hate-filled and divisive President and the Senate democrats (the Senate has the lowest approval rating of all time right now … go figure), who can’t pass a budget and who think that raising a debt ceiling is how you balance the books.  If you raise the debt ceiling you don’t run out of money, right?

Because of 536 inept elected officials, over 800,000 government employees can’t work and our national parks, monuments, and museums are closed.

Hope and change, my ass.

Since we can’t celebrate the anniversary of Yosemite’s opening by visiting the park, head over to Google’s homepage and check out the Doodle.  While you’re there, look up impeachment…

You can visit Google HERE.