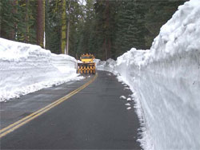 Normally, snowplows take to the road right around tax time to begin clearing it. Clearing usually takes a couple of months – depending on snowpack – so the road generally opens sometime around the end of May, or as late as the middle of June. Because the snowpack is 50% lighter than usual, the road is opening early this year.

Tioga Road, a popular crossing of the Siera Nevada, is part of State Highway 120. From Wikipedia:

SR 120 begins as a freeway intersecting Interstate 5 to extend Interstate 205 through Manteca. In east Manteca the freeway ends at SR 99 and becomes a highway which continues to head east through Escalon, Oakdale and other various small towns. East of Oakdale there are no highly populated areas for 90 miles (144 km) as it heads into the foothills of the Sierra Nevada and into Yosemite National Park. After leaving Crane Flat within Yosemite, it is known as Tioga Pass Road (or often simply Tioga Road), and it retains that name as it travels through Tuolumne Meadows and over Tioga Pass at an elevation of 9,945-foot on its 59-mile (95 km) journey to its intersection with U.S. Route 395, at Lee Vining. After a jog to the south along US 395, it continues east as the Mono Mills Road, skirting the south end of Mono Lake and providing access to the Mono Lake South Tufa as well as the historical site of Mono Mills before cresting Sagehen Summit and ending with the intersection of U.S. Route 6 at Benton. Both the portions through Yosemite National Park and the stretch south of Mono Lake are subject to winter closure. Usually the highway is open through Tioga Pass by the Memorial Day weekend at the end of May, and typically closes for the winter sometime in November.

There are some great hikes off Tioga road – more than any other part of Yosemite, in fact! – as well as views of Tenaya Lake and Tuolumne Meadows. There are also some awesome Giant Sequoias in Tuolumne Grove that are well worth a look if you can pull yourself away from the valley floor and head up to where the traffic gets lighter.

It’s still a little early to be wandering around up at the higher elevations, though. Along Tioga Road you’re only going to find some vault toilets open; nothing else is up and running, yet. Limited services will become available over then next several weeks as we get closer and closer to Memorial Day weekend.