Feedly Is Number One In My Book (Thanks, Google Reader!)

Interview With Jim Harmer on ForestForward.com 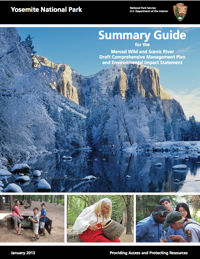 The Mercury News published an article by Paul Rogers, titled “Yosemite National Park may ban horse, bike and raft rentals, and remove ice rink and pools.”  You can read it HERE.

It’s a good article, and Paul is a good writer, and he lays everything out really well.

Personally, I have issues with the plan; I don’t believe we should be destroying ice rinks or banning bicyclists.  I believe that we should, however, draw a line in the sand; take a snapshot of how Yosemite Valley is right now, and look at preserving what we have, and managing it for future generations.  Which makes it sound like I’m against the Merced River Plan as drafted by the National Park Service.  I kinda am, but I’m also kinda not.  I like the idea behind the plan, I just think that – after the years and years of lawsuits, the fake sequestration cuts, and the political posturing by both sides – the plan is too convoluted and open to interpretation to be workable.

What I DO take exception to, however, are the so-called ‘environmentalists’ who seem to think they know better than those that would seek to conserve the land.  More often than not, environmentalists are people who never visit the places they seek to ban humans from, never see the damage done to the environment by the invasive alien species of plant and animal life they seek to “protect,” and very rarely stray far from their parent’s basements – unless it’s to use the hybrid car (made with batteries that have destroyed more environment than every Hummer ever made and that will continue to degrade the planet for decades to come) to drive to the mall to pick up cosmetics or sundries tested on innocent animals so they can live a more comfortable, air-conditioned life that is far removed from the true outside world.

I particularly take exception to comments from the article like these:

“…If anything, the park is NOT a right. It is a PRIVILEGE that we are allowed to experience. Abuse that and effectively you have ruined the ecosystem for those creatures that actually call that area home…”

“…And why not? Do you not realize how truly destructive humans are?”

Ultimately, the most destructive ‘humans’ are the environmentalists who don’t understand nature, but seek to rebuild it in their image, based on what they believe nature is. Not based on any actual facts, mind you, but based on stupidity and irrationality.  it’s rare that ANY environmentalist has ANY type of formal training or education, and even rarer still to find someone claiming to be an ‘environmentalist’ who has actually BEEN outside or to the wild places they claim to want to protect from the “bad ol’ humans.”  They think having a cat and a cat box filled with ‘environmentally safe’ litter qualifies them as an authority on the natural world.

Environmentalism is responsible for the poor health of forests; through their shoddy heavy-handed ignorance, they over-plant new trees, allow invasive plant growth, and cause mass deaths of woodlands. There’s only so much water and so many nutrients in the ground. Left unchecked and unmonitored, forests die or become kindling for massive wildfires.

Environmentalism is responsible for the deaths of millions of animals. Environmentalists would let the moose and elk run unchecked – and without natural predators – wherever they choose, without realizing that the moose is a habitat destroyer, just like the elk is. They will forage and graze like locusts until all the food is gone, then die of malnutrition, tick infestation, harsh weather, and disease as the weak infest the rest of the herd.

Environmentalism is the bane of every healthy ecosystem; it is the heavy hand of man destroying the work of God because man thinks he knows better.

Conservation, on the other hand, is proper stewardship of the land.  It is the intelligent use of natural resources, and the proper cultivation of the environment for all creatures – the great and the small.

HUMANS aren’t ‘truly destructive,’ as one of the commenters on that article – Chelsea- put it; STUPIDITY is. Greenies have no interest in preservation; their only interest is to kill the planet through mistakes, ignorance, nannyism, and entitlements.  And to blame someone else for it.

The proper course – the course originally laid out for Yosemite – is conservation; the preservation and stewardship of open spaces and wildlife for the good and the enjoyment of all. Does that mean destroying bridges or ripping out swimming pools or an ice rink? No. Does it mean stopping bicyclists and horseback riders? No.  Does it mean removing humans from lands originally – and specifically – set aside for them by the United States government through the Yosemite Grant?  No.

What conservation means is the intelligent management and preservation of the Yosemite Valley and the Merced for all – and forever. The beauty of Yosemite belongs to the people; it is most definitely NOT a ‘privilege,’ it is a right of the people.

Environmentalists often confuse rights and privilege, and that is why we have out of control wildfires, damaging floods, and native animals and plants being wiped out by invasive species.

With RIGHTS come responsibilities. The same isn’t true for privilege; privilege – by it’s very definition – is an entitlement. An immunity. A get out of jail free card that says ‘whatever happens, it’s not MY fault.’

The Merced River Plan – which you can read about HERE – should be reworked.  We need to look at the plan from a conservation point of view, and remove the political and environmentalist mentality from the picture completely.