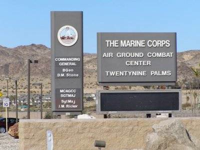 If you’ve been following along here, you’ll know that the U.S. Marines are attempting to expand their Twentynine Palms base – the Marine Corps Air Ground Combat Center (MCAGCC) – and take over a large portion of the Johnson Valley OHV area.

On January 2nd, President Obama signed into law H.R. 4310, the National Defense Authorization Act for Fiscal Year 2013. This bill includes a provision in Section 2856 which requires the Marine Corps to study the feasibility of the use of the OHV area under a permit – just like other users of the area are required to do – rather than absorb the OHV into the Twentynine Palms Marine base.

In a press release, the Off-Road Business Assocaition (ORBA) is reporting that the provision triggers a hold on spending and imposes a 90-day deadline for the military to report to Congress on how its proposed expansion of a Marine base at Twentynine Palms, California will impact OHV use.

The American Motorcyclist Association (AMA) is reporting that the The language was inserted into the bill by Rep. Roscoe Bartlett (R-Md.) with support from Sens. Diane Feinstein (D-Calif.) and Mark Udall (D-Colo.).

“This requirement for a report to Congress is very important because it will force the Navy to explain to the people’s representatives why it wants to bar riders from one of the most popular riding areas in the country,” said Wayne Allard, AMA vice president for government relations and a former congressman and U.S. senator from Colorado.

You can read the full press release from ORBA HERE.

You can read the full press release from AMA HERE.

The Blue Ribbon Coalition is also reporting on this HERE.