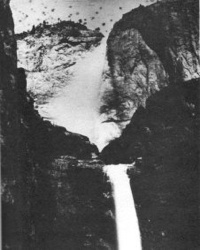 Charles Leander Weed (1824-1903) is often cited as the first photographer to have captured the beauty of Yosemite on film.

During the California Gold Rush, Mr. Weed moved to Sacramento, California and began working in the studio of George Wilson. He met a local entrepreneur and publisher, James Hutchings, and traveled with him to Yosemite Valley in 1859 – the second tourist party to travel there.

(This small photograph is a half-tone from Yosemite Nature Notes v.38, #6, first published in 1959.  In that issue Mary Hood states that the photograph “…was found in the Vance Album at Stanford University, and was not present in the Rosenblatt album formerly at the Yosemite Museum.”  The original has been lost to time.) 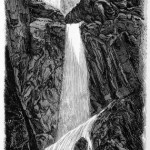 “…Now, it may so happen that the reader entertains the idea that if he could just look upon a wonderful or an impressive scene, he could fully and accurately describe it. If so, we gratefully tender to him the use of our chair; for, we candidly confess, that we can not. The truth is, the first view of this convulsion-rent valley, with its perpendicular mountain cliffs, deep gorges, and awful chasms, spread out before us like a mysterious scroll, took away the power of thinking, much less of clothing thoughts with suitable language…” – “The Great Yo-Semite Valley,” Hutchings’ Illustrated California Magazine, Oct. 1859, by James M. Hutchings

(Woodcut, presumably from the above half-tone, titled “Near View of the YO-SEMITE FALLS,
2,500 FEET IN HEIGHT.”)

On their return from Yosemite, and presented them to the public at a photo exhibition in September of that same year. Hutchings published four installments of “The Great Yo-semite Valley” in “Hutchings’ California Magazine” along with woodcuts based on the photographs Weed took during the trip 1859 trip.

Charles Leander Weed took many photographs of the valley, some have been enshrined at the Smithsonian American Art Museum, while still others are part of exhibits.  The example below – “Yosemite Valley from Mariposa Trail” – is from the Cleveland Museum of Art’s “Icons of American Photography” exhibit. 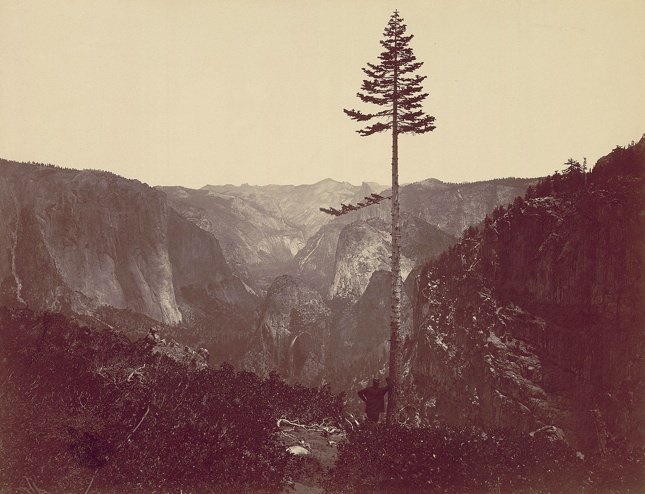