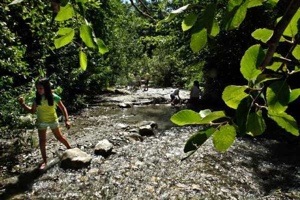 There’s a reason that forests have grown they way they’ve grown for millions of years.

Through man’s – or worse: environmentalist’s – misguided broad-brush meddling, our nation’s forests are becoming as unmanageable as the government bureaucracy that is charged with overseeing it.

Instead of listening to conservationists and forest managers who understand forest health, federal policy spearheaded by so-called ‘environmentalists’ who know little (if anything) about the complex relationship that makes up a forest had lead to wildernesses that are over-forested. You literally cannot see the forest for the trees.

Through intervention and afforestation, we are creating denser tree populations. These trees are living on less sunlight, fewer soil nutrients and water resources that have slowed to a trickle. We’re growing weaker trees. Through the continued intervention of urban environmentalists, we are choking our forests with nothing more than wildfire fodder. The result of this political environmentalism is faster spreading disease, hotter burning fires and unnatural forestation that will eventually kill itself.

We need to be good stewards of the planet we live on. We need to stop the politics of stupidity.

Here is an excerpt from opinion piece by Helen M. Poulos and James G. Workman “Our Too-Thirsty Forests” from the Los Angeles Times that explores how federal fire suppression has led to an overabundance of trees:

Ronald Reagan once justified logging with “a tree is a tree; how many more do you need to look at?” Besides, he warned, “trees cause more pollution than automobiles.” We cringed at his biases. Yet due to forces none foresaw, Reagan’s gaffes may now ring true.

Today, the hottest and thirstiest parts of the United States are best described as over-forested. Vigorous federal protection has stocked semiarid regions of public land with several billion trees too many. And day after day these excess trees deplete a natural resource that has become far more precious than toilet paper or 2-by-4’s: water.

Scientists and water managers report that 39 states face water scarcity. Much of the nation’s freshwater shortfall comes from our population growth, waste, hunger and contaminants. But we must also now implicate the escalating thirst of unnatural forests.

Water depletion from afforestation — the establishment of trees or tree stands where none previously were — is the unintended consequence of a wildly popular federal policy. For millenniums, fires set by lightning or Native Americans limited forest stocks to roughly a few dozen trees per acre. All that changed after the nationally terrifying Big Blowup wildfires of 1910, which led the United States to in effect declare war on wildfire. The government’s wartime-like tactics included security watchtowers, propaganda, aerial bombing and color-coded threat alerts. Uncle Sam trained elite Hotshot and Smokejumper crews to snuff out enemy flames. Congress annually funded the war effort with an emergency blank check, now $2.5 billion.

You can read the rest of the article here: Our Too-Thirsty Forests

One thought on “Unnatural Forests – Environmentalist vs. Conservationist”