Yosemite National Park was one of the first wilderness park areas set aside in the United States through the Yosemite Grant; a bill approved by the 38th Congress and signed by President Abraham Lincoln on June 30, 1864. This was the first time that park land was specifically designated for both preservation and public use. In fact, the Yosemite Grant was used as a framework for the creation of Yellowstone – America’s first National Park – in 1872.

Yosemite is best known for both the spectacular waterfalls that grace the valley as well as for Half Dome, the most widely recognized granite dome in the world. But the park is much more than just some waterfalls and a big ol’ rock that appears in Disneyland’s Soaring over California ride; the park covers parts of Tuolumne, Mariposa and Madera counties, and stretches across the western slopes of the Sierra Nevada mountains. It is 1,200 square miles of nature; deep valleys, wide meadows, and giant sequoias that have stretched skyward since before the United States was a nation. 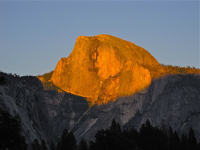 The Yosemite Conservancy is the sole outside organization that manages the preservation and protection of the park. Formed by a merger of the Yosemite Association and the Yosemite Fund, this philanthropy has combined over 100 years of experience to maintain the park and enhance the visitor experience. And – with almost 4 million visitors a year – the Conservancy has a full time job.

“…The Yosemite Conservancy has funded over 300 projects through 55 million in grants to help preserve and protect the park. The work of the Conservancy can be found in every aspect of the visitor experience from trail restoration, bear-proof lockers, wilderness permits, wildlife preservation, outdoor education and so much more. Annually the Yosemite Conservancy recruits over 400 volunteers to work in the park to repair trails, remove invasive species, and provide visitor information…”

Yosemite is one of America’s great National Parks, and a jewel of California. It has been recognized by UNESCO as a World Heritage Site, and is one of the most beautiful places on earth. It has been photographed extensively, and written about by John Muir, the Scottish-born naturalist who long advocated the preservation of wilderness areas in the United States.

The Yosemite Conservancy offers programs that provide visitors many great ways to connect with the park. They have produced many award-winning books and DVDs to educate and inform the public about the park and it’s heritage. It is a philanthropic organization well worth supporting.

You can support Yosemite and the Yosemite Conservancy by:

Visit the Yosemite Conservancy website, and take the time to visit Yosemite National Park, it’s well worth the trip!