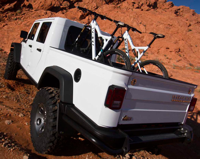 “…When we released the TJ Brute in 2002 at the Las Vegas SEMA Show, not even Chrysler really knew it was coming and it was the absolute hit of the show. It was great to see the reactions, because at the time nothing like it had ever been done to such a high level of quality. Well, we did it again. Introducing the AEV Brute Double Cab, a double body and separate box pickup truck conversion for JK Wranglers. This is the real deal, targeted at the Overland crowd, this is a vehicle that will perform exceptionally well off-road compared to a Dodge Ram or Dakota, while having more storage room than a four door Wrangler could ever offer.

“When we originally created the Brute, it appealed to off road enthusiasts looking for something different,” says AEV Founder and President Dave Harriton. “Now with the debut of the Brute Double Cab, we’re expanding the Brute series to a four-door platform that has everything people have come to expect from an AEV Brute, but with more interior room and the improved capabilities of the JK platform.” Harriton continues, “The Brute Double Cab shares its DNA with the original Brute, but also draws inspiration from the Land Rover Defender 130, and was designed specifically for the expanding overland travel market. With seating for five and the storage provided by the fold flat rear seats, it makes for an ideal camping platform, whether it be a couple weeks through the Atacama desert or just a weekend trip with the family.” 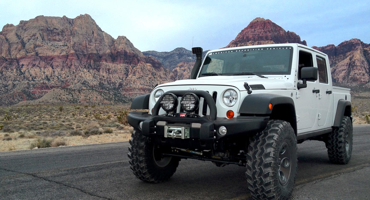 The original AEV Brute won the hearts of auto enthusiasts of all kinds and also won a Daimler-Chrysler Designer Excellence Award. The all-new Brute Double Cab will follow the same truck-conversion design principle as its predecessor. AEV starts with a four-door JK Wrangler and stretches the chassis 23 inches for a final wheelbase of 139 inches. The overall vehicle length stands at 216 inches, a total increase of 30 inches, with a small frame extension at the rear to accommodate the pickup bed. The interior dimensions of the Brute Double Cab’s truck bed are 61″L x 60″W (44 inches between the wheel houses), offering plenty of haul space in a highly capable off-roader.

Harriton is quick to point out that the Brute Double Cab is not meant to be an alternative to a traditional pickup, but is uniquely positioned to serve the overland market with more off road capability than a four-door truck and more cargo room and carrying capacity than a Jeep.

AEV will offer the Brute Double Cab as a turn-key vehicle built in its Wixom, MI facility, and expects a production release by mid-2012. The opportunity for the first orders will be given exclusively to current owners of AEV vehicles and to AEV’s authorized dealers, with orders opening to the public as production ramps up.